Carrie and I saw Jenny and Johnny perform at The Cosmopolitan, the newest of the Strip casinos. They seem to be doing a good job of getting great indie performers there, so I hope they can keep it up. Although I know Jenny is the object of many a boy crush (disclaimer: when I saw her in El Paso, TX, close to ten years ago, she was very nice and gave me a big hug), she is one of my biggest influences and inspirations as a writer.

The show was pretty casual, and not many people were talking to to the band before they played, so Carrie and I decided to say hello. Carrie told Jenny that I was her biggest fan, then took a picture of us together. I never know if this is a good thing to tell someone; I told her that she probably gets this all the time, but she is one of my biggest influences. She said she never gets that, and seemed very moved that I had told her. So I was glad I shared.

Their performance was absolutely fantastic. Jenny and Johnny are both passionate and obviously committed (no reference intended, unless you caught it; good job!) to delivering a stellar show, even to an open casino area of non-ticketed fans and passers-by.

Oh, a few minutes after we talked to her, after some indecision and discussion, I rushed over and gave her one of my newly printed business cards and said something like “If you ever need an opening act in Vegas, let me know.” What’s the harm, right? At worst she won’t look me up or will misplace the card (although she did put it in her jacket pocket), and at best she’ll listen to songs like “some cliches,” “like a pirate’s hat,” and “if i left the stove on,” realize how profoundly she’s influenced me, and want to cover my songs and/or produce an album, possibly taking Carrie, the dogs, and me on tour with her and Johnny. No pressure, Jenny. 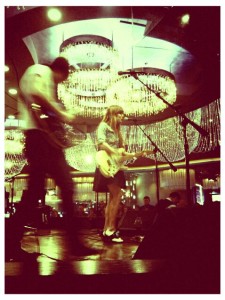